Never thought I would hear anything like this come from Mr. Crazy himself, but I thought this reflected my thoughts on gay marriage and the horrible Prop 8 that passed in CA.

Matt’s had to deal with two cranky and sick ladies in the house, and deserves a present for putting up with us.

Me:  3 weeks ago, I got a cold.  It was annoying, and my cough was horrible.  I was drained and just wanted to sleep.  OTC meds did jack squat.  Fast forward to Wednesday- I had a little annoying dry cough left over from the cold, but it was quickly dwindling down into nothing.  I am in the mood for beef (I haven’t really had that much since starting back on meat), so I head over the Lion’s Choice- yum!  6 hours later, I suddenly feel like I had been hit by a truck.  But my stomach was killing me too, so that’s what led me to believe it was some mild food poisoning.  The next day, I wake up to all of the classic flu symptoms- stiff, achy, body; headache; mild fever; dry, hacking, cough- you name it.  Most of the symptoms have gone away, except for I’m still really tired, I get a headache once a day, and the cough.  All in all, I’m going on a whole month of being sick.  I have never been this sick for so long.  Thankfully I am getting better every day, and the not wanting to eat made me lose 4 pounds!

Molly: Classic UTI symptoms- peeing outside her box, cleaning the little box almost knocks me out with the ammonia smell, not drinking.  We’ve dealt with this before.  She’s also been itching her ears, which would require the vet to do a LOT of testing (it could be anything from allergies to fluid in the ears to ear mites).

They gave us different antibiotics than the last time she had an UTI, and a couple days of liquid pain meds.  I have tried, and simply cannot, give Molly liquid meds.  That’s officially Matt’s job.  These new antibiotics, however, are light sensitive, so they can’t just go in her food like the other ones did.  Oh no, I have to pill her ever 12 hours.

Not a big deal, right?

The first two times, she was great, and we had no issues.  I was surprised she wasn’t going to be a bigger pain in the ass.  She saved it all for today.  I did nothing different in my technique, and she went nuts.  She actually swiped and hissed at me!  I have never been so pissed off at her in my life, and this is the cat who destroyed my leather couch.

Her next pill is going to be in 2 hours, and I think I need a stiff drink.  DayQuil and rum is ok together, right? 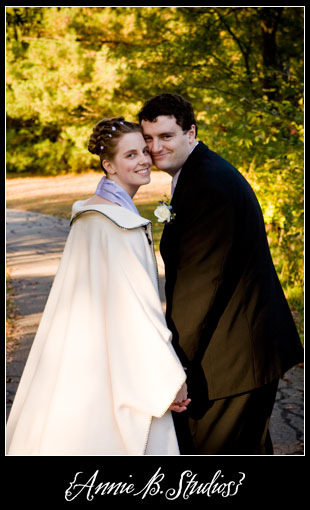 John and Karen are so cute, it’s almost sickening.  This has to be one of my favorite pictures from the whole day.  It’s so nice to work with a couple who are truly affectionate, and aren’t nervous in front of the camera.  Being friends with them helps a little too.  🙂

I rented the Canon 24-70 f/2.8L for the day.  All in all, I am LOVING this lens.  Since it’s L-series, it’s a little pricey, but it’s fast and sharp.  I wish there was IS built in, because I have not-so-steady hands, but I can live without it.  And it took a little bit to get used to the size and reverse zoom, but I definitely think it’s the next lens purchase.