Seriously, HOW can people wear earbuds?  They hurt my ears like a mofo, and never stay in for more than a minute.  And before you ask, NO, I’m not shoving them into my ear canals.

So, the hunt is on for earbuds that will be comfy for my small ears, work with my iPhone, and don’t cost $100.  Yeah, good luck with that!
Anyhoo….Matt decided that he wanted to buy his OWN graduation present (I’m still grumbling about that, but whatever), and picked up two tickets to see Kids in the Hall at the Pageant.  I wonder if they’re really going to rape Kevin, like they said they would?

No, I didn’t get physically hurt, but Mallen can attest to my mental state.  Since the spouse was at class all night, I headed over to watch Fido with Mr. Allen.  I really liked Fido.  It was a zombie movie, but not in the traditional style.  It’s hard to explain really.  I recommend seeing the trailer for a better idea.

Afterwards, we decided to watch something else from Netflix…..a movie called JESUS CHRIST, VAMPIRE HUNTER.  All I can say is wow.  It was 90 minutes I will never get back.  It was so bad, I kinda liked it.  We couldn’t turn it off.  Featuring vampires, lesbians, Mexican wrestlers, priests with mohawks, and a character named Mary Magnum, you KNOW it has to be good!
My brain is still trying to figure out what the hell was going on.
I *just* finished this one.  All of my scrapbook pages have been green recently.  No idea why. 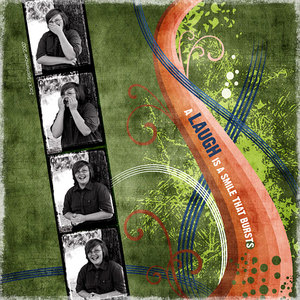